The day on Friday started with a hemp infused lunch by renowned vegan chef Jason Sellers of the restaurant, Plant, in Asheville. Unfortunately, I had to run an errand and missed this- everyone said the food was amazing, and I look forward to tasting some of his hemptastic creations in the near future! Also, the hempeh people were there and I got to taste some of their creations – delicious!!

On Friday afternoon, we had a paper making station setup and children of all ages came to make paper! It was really heartwarming seeing the reactions of people, especially young children who were genuinely amazed by the paper making process! This amazing event was free to the public and featured great music by the London Souls, and more! On Saturday, I presented the Art of Hemp Papermaking and spoke about the process of making paper from raw hemp fibers and shared some images from our work over the years. Thanks to all who came out and listened. 🙂 The organizers Blake Butler and Jill Lieberman are true professionals and passionate about farmers and educating people, helping hemping the movement move! Many thanks. 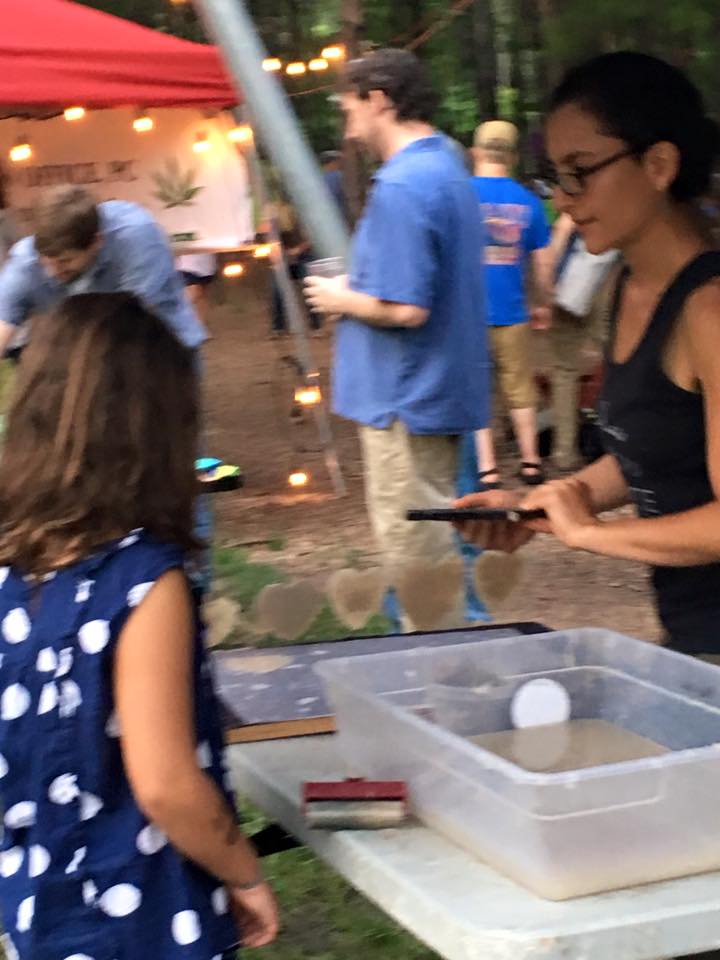 Making hemp paper with a youngin’ 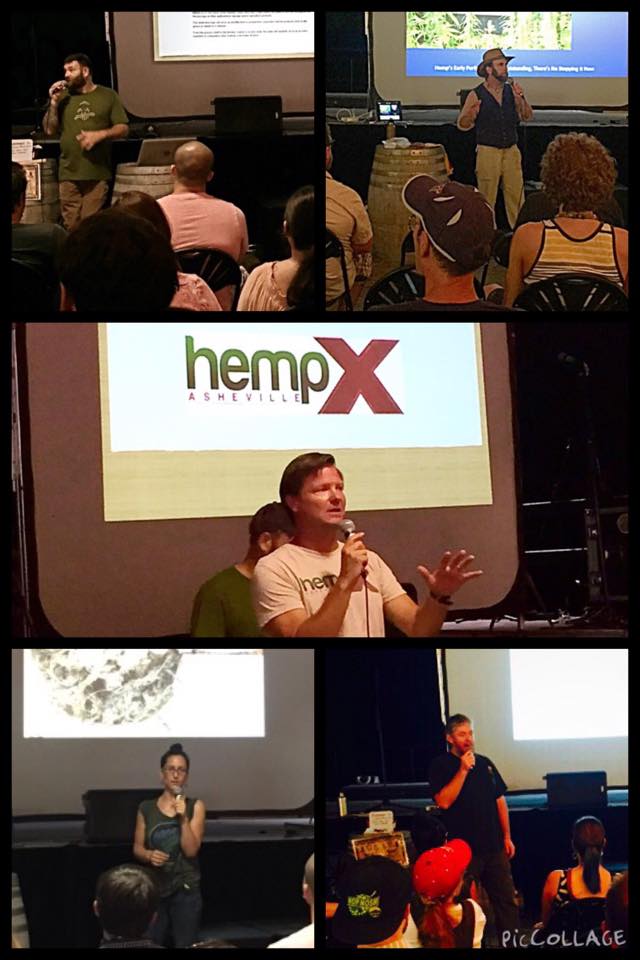 Honored to be pictured with amazing leaders in the hemp movement!

Well…Artisan Hemp taught a hemp papermaking workshop..and i’m sorry but there are no photos. here’s one of the dreamcatchers at Floydfest…our assistant who was going to photograph the workshop was unable to attend and unfortunately we do not have images from this great event. It was awesome tho! And Nahko and MFTP put on an amazing show!!!

Update: Thanks to Wendy Steckroth for sharing this photo of her precious daughter making paper at Floydfest! Also the cool bug who helped oversee the process. 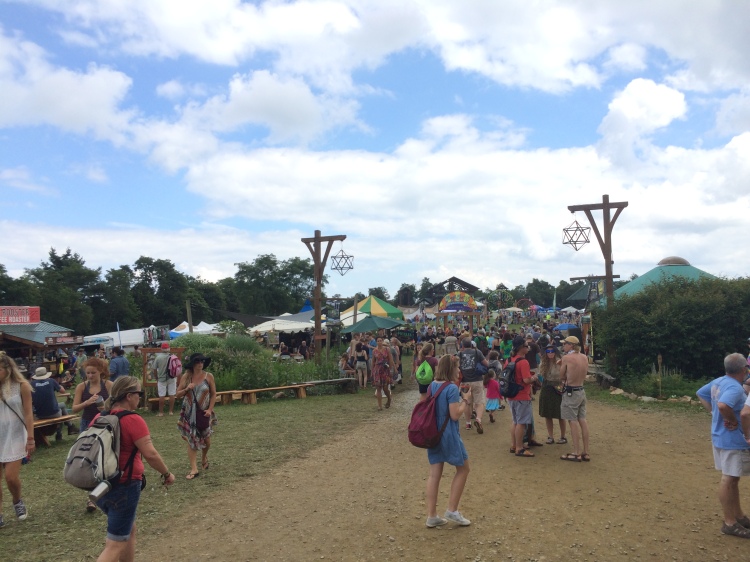 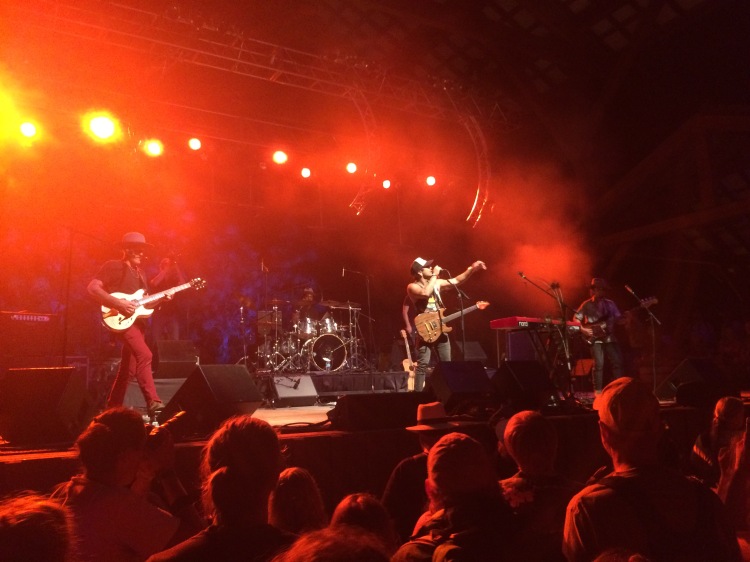 Nahko & Medicine for the People

On July 22, 2016, the 4th Hemp Heals Music Festival took place in Philly. It was a great event, as always. I missed last years event, and during the time since I attended in 2014, Philadelphi 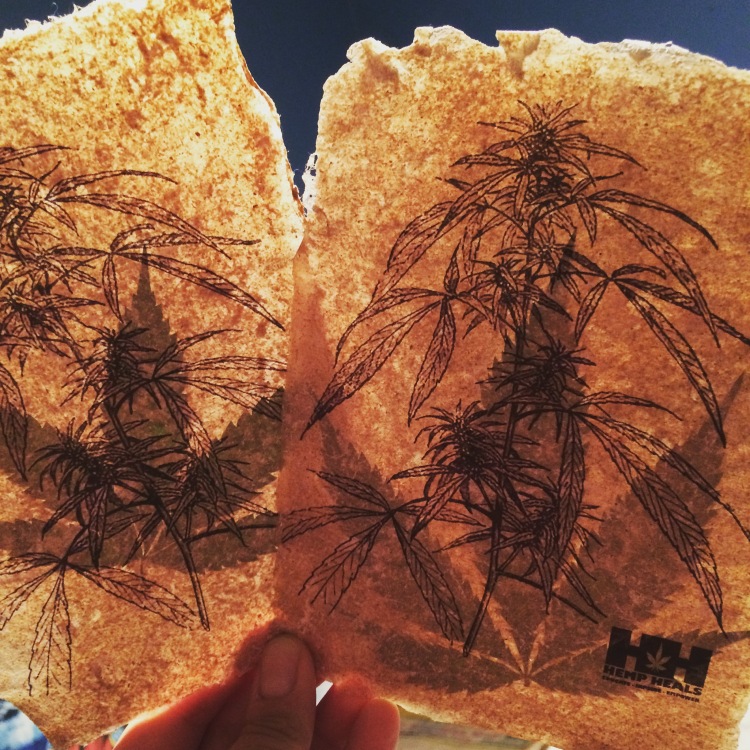 decriminalized marijuana…and there were many joints lit, including a giant spliff smoked on stage. Times they are a changin’. Riley Cote, former Philadelphia Flyer and founder of the Hemp Heals Foundation, has been a great supporter of Artisan Hemp. In 2015, we made custom printed posters for the festival and did again this year and included some cool new products, including posters with cannabis leaves inside the paper. Here are some photos. The headlining musicians were 311 and Matisyahu and it was a true honor to go backstage and meet Matisyahu, while he signed the posters.

Here are some photos. Make sure to check out Hemp Heals next year! 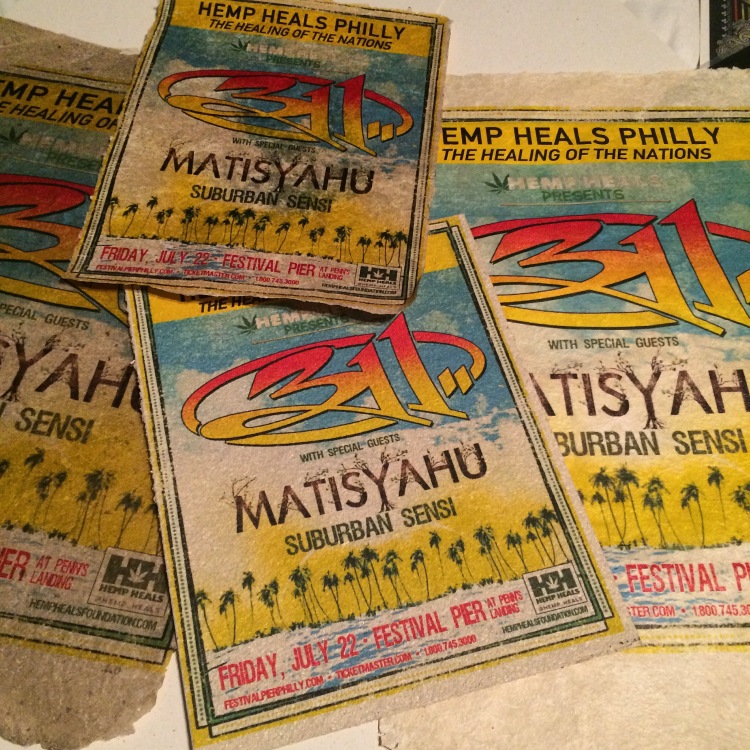 Poster with cannabis leaf inside!

Close up of poster coming out of printer.. 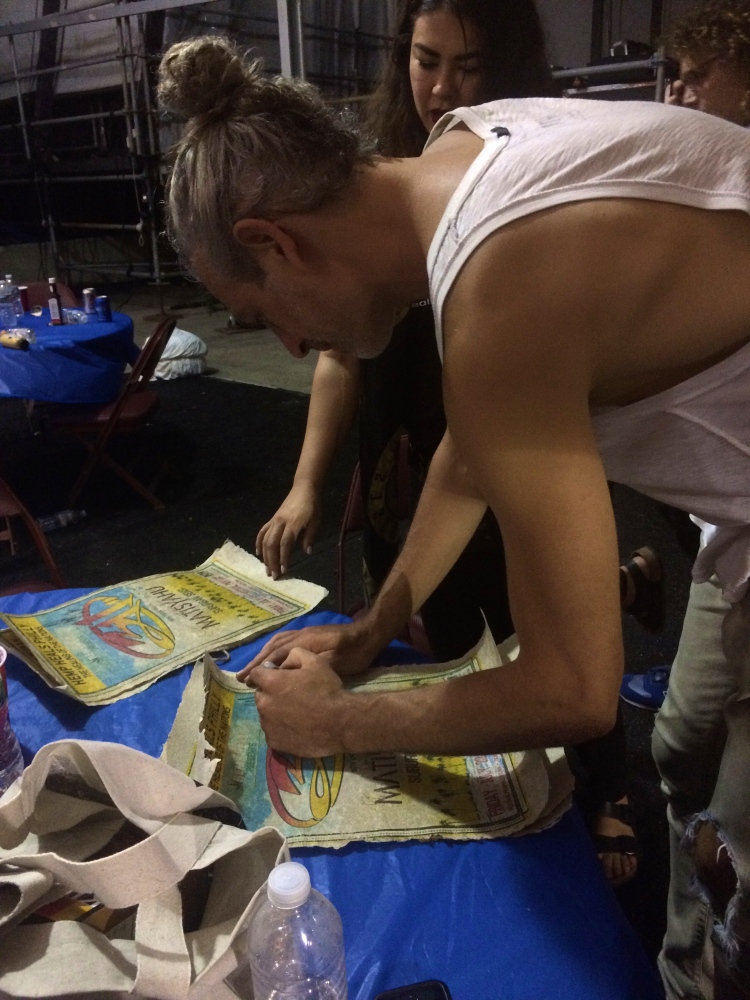 On June 10th and 11th of this year, I attended and presented at Hemp in the Holler, a celebration of hemp at a hemp farm in Livingston, KY. Activities included workshops on hemp farming, hempcrete construction, hemp breaking and hacking, and paper making. I brought Emanuel, the portable beater, and we made paper with fibers grown right there on the farm.

It was a great event, with many industry leaders in attendance and a laid back, family friendly atmosphere. I enjoyed sharing the art of hemp paper making with so many interested people. Thanks to Eric Hackworth for getting these photos of the paper making workshops and supreme gratitude to all who attended, to Blake Butler and Jill Lieberman, who worked day and night to organize this event and make sure everything went smoothly, and to Mike and Melinda Lewis, who welcomed us all to their beautiful farm.

Checking pulp in the beater

In late may of 2016, Dr. Bronner’s generously donated a portable beater machine to our paper project. This made it possible to travel and teach paper making workshops anywhere. It also allows us to process fibers and make paper pulp on the farms where hemp is grown. In June, we made paper at Hemp in the Holler, at Healing Ground Farm in Livingston KY, from hemp fibers grown on their farm! See the next post for photos and a recap of that awesome event.

The critter beater is awesome – it chews up hemp fibers and fabric scraps like a beast.

Thanks to David Bronner for generously donating towards this purchase and to Adam Eidinger for allowing us to work in his home office and for letting us use hemp/cotton fabric scraps from phrygian hat production!

Here are some photos of the initial beatings with Emanuel, the beater, named after the Dr. Bronner! 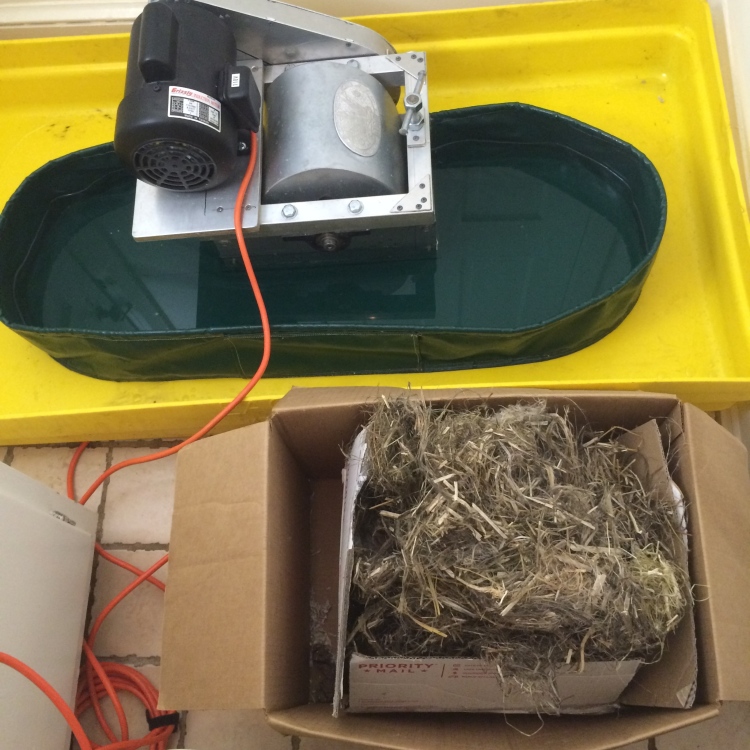 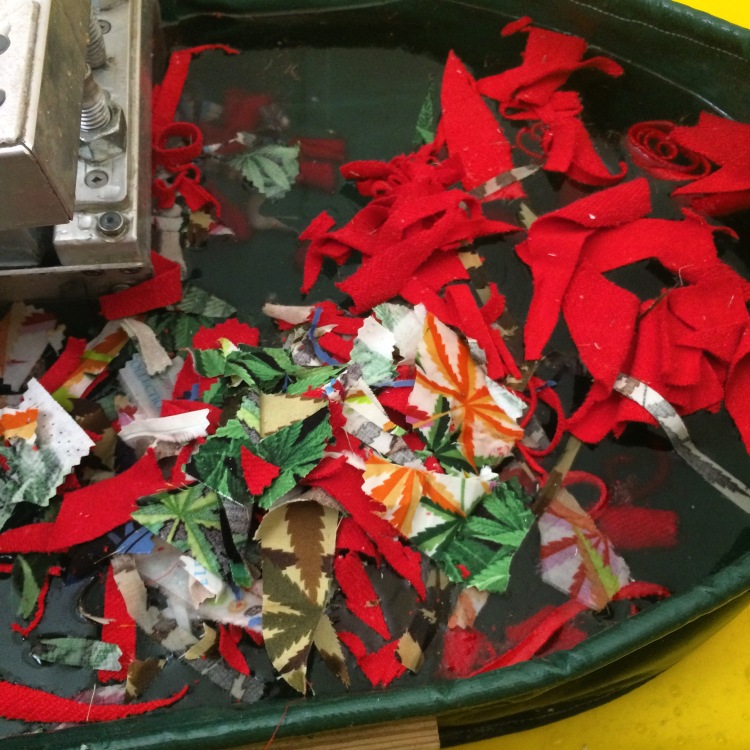 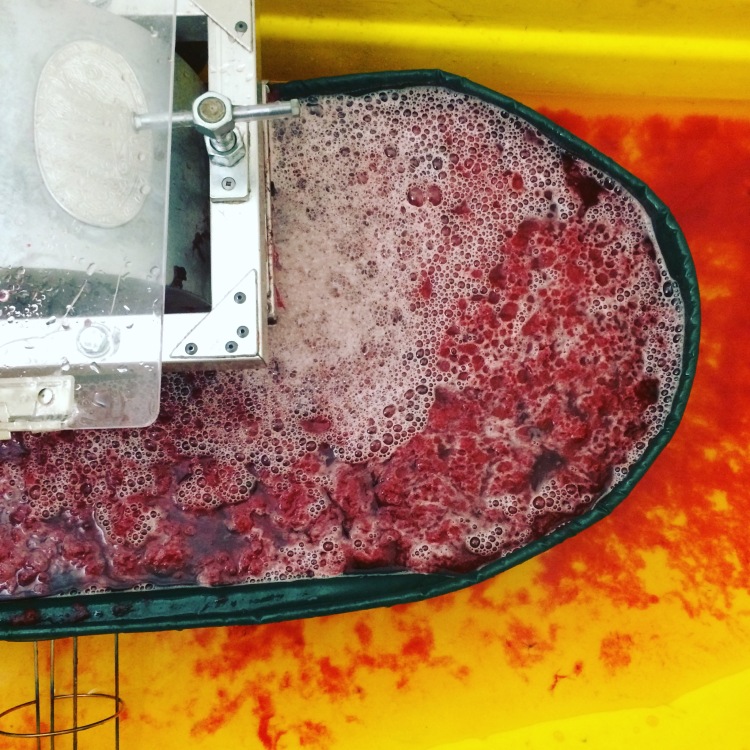 Pulp going into the vat for sheet forming.

Finally catching up on blogging. The past few months have been a bit of a whirlwind.

Some of you may be familiar with the band, Nahko and Medicine for the People. If you haven’t heard their music, check ’em out! They’re amazing live, so be sure to see them in concert. Their music really is medicine. http://www.nahko.com

The hemp paper notebooks were produced as part of Nahko & MFTP new cd pre-order bundles. It has been our largest order thus far. They sold out. The journey from the time I got the email about the notebooks, to the time the project was completed is hard to describe. My initial thought upon reading the email was, “sorry. I can’t do it.” The next night, Nahko was in my dream. I woke up and knew I had to fucking do it. I didn’t know how, I just knew it had to be done and I had to figure out how. And that’s what happened.

In June, I saw Nahko at Wanderlust in WV and thanked him in person. He told me that when I told him about the hemp paper, he heard me. He understands. So grateful. I told Nahko, “Thanks for lighting a fire under my ass.” He said, “Don’t stop.” As he said, it’s all about the timing. It was perfect alignment and if it had been different, it probably couldn’t have been done. (The community art studio where I worked was getting ready to relocate, and there happened to be a lull in classes and other renters. This meant I was able to rent the studio and utilize it on a full time basis for about 2 months.)

We didn’t use 100% handmade paper inside because of production/time limitations, and wanted the notebooks to have a nice substantial amount of paper inside and so we used a hemp/recycled machine made paper, available in bulk. We are working on production of 100% hemp paper and until then, this Hemp Heritage blend is the highest content mass produced hemp paper available. The covers were produced as double sheets, making them thicker and stiffer than regular sheets (and twice the amount of work) and they have the text, “It is written” screen printed on. This is the name of one of the tracks on their new cd, HOKA. Here are some photos…if you happened to have one of these notebooks, I hope you are using it well and that your dreams are manifesting!! 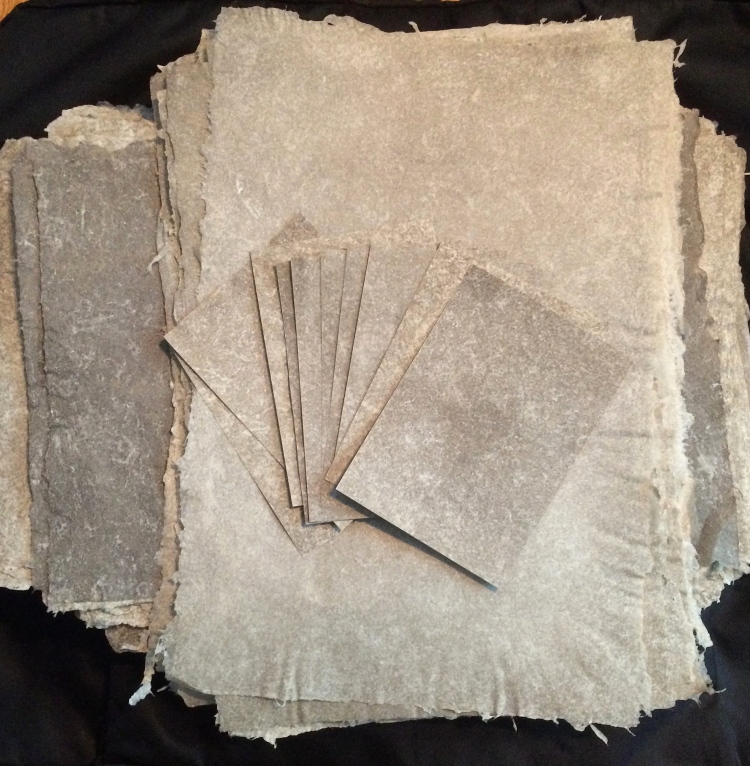 Please take a moment to sign and share! We will be delivering this petition on hemp paper in September and need as many signatures as possible. It is time to lift the nonsensical ban on cannabis. Time to grow!

Please join me and the National Hemp Association to help pass the Industrial Hemp Farming Act: Sign this
<

When people ask what the difference between hemp and marijuana is, I find myself saying that they are both cannabis sativa and it’s kind of like a sweet pepper vs. hot pepper- both members of the same plant family, but expressing very different characteristics. The hemp farm bill amendment legally defined industrial hemp as Cannabis Sativa with less than .3% THC. We can describe hemp as low THC and marijuana as high THC. I dislike using the term marijuana because it has racist roots, and am using it for the sake of clarity. I am beginning to become tired of the word hemp as well, even though I use it to market my products under the Artisan Hemp name. We can even go further to speak of cannabis variations in terms of their end use – for example, cannabis for fiber, oilseed, and drug/medicine. Maybe that would just make things simpler and help clear some confusion.

People say hemp produces more pulp than trees. Hemp is much higher in cellulose, the component used to make paper – and has less lignin (which is removed pre-pulping) than timber. So, is there a way to measure cellulose content in plants? Maybe we can rate the paper according to how much land was used to make it, the effects on the ecosystem and how it effects the atmosphere…for 6 month old hemp plants with higher cellulose than trees, how much trees would be killed for the same amount of let’s say an acre of high fiber cultivar hemp seeded generously. How is the air and soil quality affected, how many animals and have lost their home and food source, how much topsoil may now blow away, and will there be more flooding as a result? There must also be a rating for how toxic the water becomes and what chemicals are used in processing, as they inevitable end up in the water and surrounding land. How does this compare to recycled paper? Is it worth looking into making items such as toilet paper and paper towels from raw hemp, or is continuing to make more of those products with recycled paper a better idea? Eventually, when more hemp paper is available en masse, recycled paper will be made with hemp. The great benefit of hemp is that it is such a strong fiber and can be recycled many more times than tree paper.

Earlier, I posted to Facebook asking people what kinds of hemp paper products people want, and someone mentioned hemp toilet paper and paper towels. That is definitely not fit for artisanal production; however, this would be great to see more hemp paper in the market!! We still need to reduce paper consumption, so get a bidet if that helps. 😉 I have some thoughts and questions about the most sustainable ways to produce paper. After all, before the automatic printing press was invented, most paper was made from rags! For more efficient production, is it better to take a waste product of something that has already been processed somehow, and turn it into paper for certain items (disposable products like toilet paper, coffee cups, food packaging, etc.) The artisan hemp paper is especially good for artwork when it is made archival. Handmade paper is stronger than machine made sheets – the cellulose fibers are not in a straight line, which strengthens their bond. Recycled paper goes through a de-inking process resulting in chemical waste (maybe we need natural non-toxic ink then…) and also there is no CO2 offset to the output from trucks and factories like their is with cannabis paper.

I definitely need to do more research, and if anyone has info or ideas, please comment.

Also, here’s an informative Wikipedia page about the environmental impact of paper: https://en.wikipedia.org/wiki/Environmental_impact_of_paper

Paper is a medium…

It’s all about intention and how it is used.

It can preserve culture, educate, inspire, heal, or destroy.

The process of paper making is transformative. It is using the mind, heart, and hands. It is a teacher of patience and concentration. Observation and presence. Paper making is a great master, weaving the fibers of life, water activating the process, leaving the elements to bond and create a vehicle for humanity. 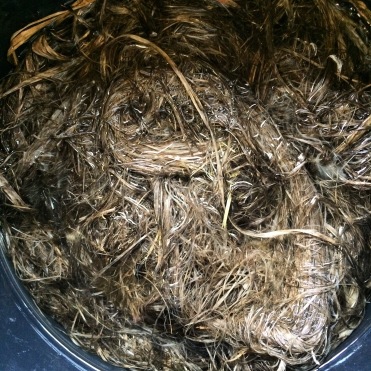